Thanks to the unique unforeseen global circumstances we find ourselves in at present, I've had a fair bit of time on my hands so have been learning/improving various skills. I enjoyed working on the Avolites project using Node.js, React & Electron, so when I found Expo I thought it would be fun to make something vaguely useful with it. Expo lets you use one JavaScript code base to build native iOS & Android apps, as well as experimentally to the web - and then with Electron to desktop apps.

I've made a fairly simple app that let's you calculate custom video formats for Barco's Event Master products, which is pretty much an EDID - so this app is useful for other devices too including other Barco products, like their PDS range. 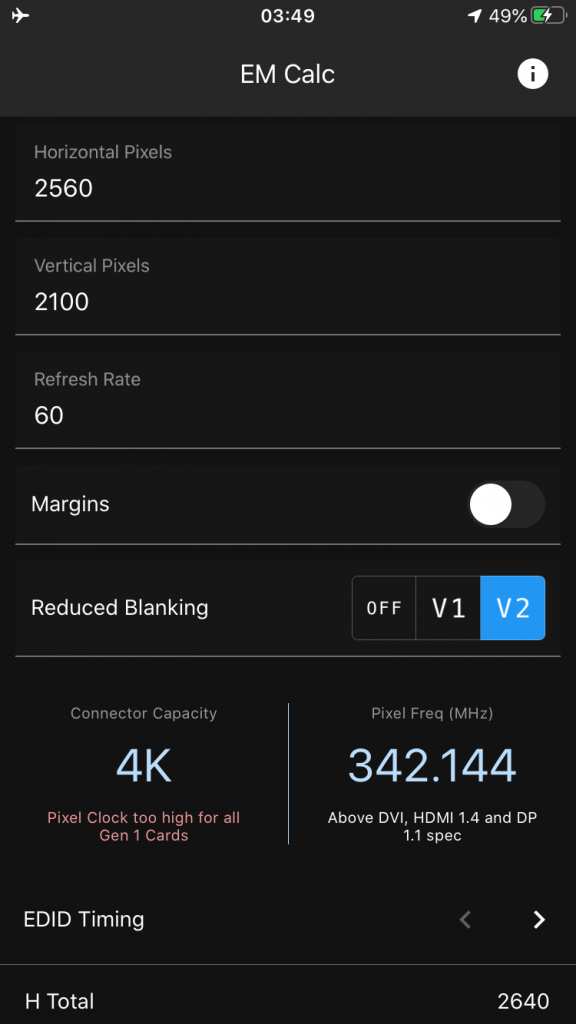 The UI is mostly comprised of components from the React Native Paper library with a few customised bits. As it's written with React Native it can easily run natively on Android or iOS as a standalone app (see iPhone screenshot). If there's demand I'd be happy to release it on either platform but in the meantime you can add the site to your home screen and it will work offline as it's a Progressive Web Apps (PWA). If you want to see what's it's like to run natively, try running the Expo Client locally - view the repo for more info.

I've automated the build process using GitHub actions so that every time I do a release, it automatically builds the web version of the app and uploads it to the site, as well as creating the desktop versions for Windows, Linux & Mac, making them available for download on the releases page. Similarly every push to the repository runs the tests, which were handy to make sure the logic of the app was correct.

The logic is based on a spreadsheet which calculates the VESA standardised timings, created Graham Loveridge, Syed Athar Hussain & Scott Gershick. This calcualtion became a feature of the Event Master Toolset in version 6 of the software I believe, however this app is still handy just to know how many links you'll need for an input, for example.

This type of development would be great for rapid prototyping of apps, as well as custom apps for events which need to be built quickly and support many devices.